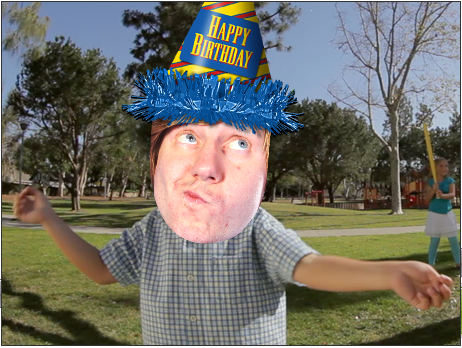 There’s no better way to let someone know “It’s their birthday and you’ll party down cuz it’s their birthday” than with Birthday Rap, our newest eCard. This rapping 8 year old with attitude was created by the guys at Surf Monkey Films. After receiving the rap mp3, Max Well, Nolan Wang and Alex Lamb took it upon themselves to create a vision to match the fun lyrics of this birthday rap. We got to talk with the guys more about their process and where they came up with this concept.

1) Where did you all go to school?

The three of us, Max Well (Producer), Nolan Wang (Cinematographer) and myself (Director), all graduated from Chapman College of Film and TV.

We shot this particular video in a park in Anaheim Hills with kids from Nicole Manly’s class at Orange County Song and Dance.

3) How long did this card take to shoot?

This card took about a half day to shoot. There was a lot of time spent getting the kids comfortable in front of the camera. Once they were comfortable, we even went back and reshot some stuff we thought we had already gotten, simply because it came out so much better once the kids dropped their guards. Also some shots took a while just because of the setups and timing required. I think the longest shot we had to get was the opening dolly move at the birthday table. Synchronizing the kids performances with the camera move was the ingest challenge.

4) Where did your inspiration come from?

5) Do you guys have a favorite rapper?

Max’s are Jay-Z and Ludacris.

My favorite rapper is Mc Chris. I didn’t realize that I liked rap until I heard rap songs about things I could relate to. Mc Chris has an ironic way of using a hip hop persona to express very nerdy experiences and feelings.

Bust out a Birthday Rap to a friend today!