New eCard – Duck in Your Pants 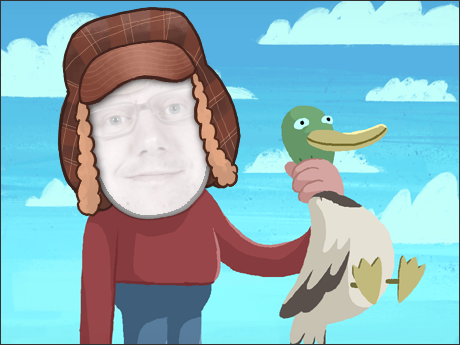 What better way to celebrate your birthday than doing whatever you want, even if that means stuffing a duck down your pants. In our newest birthday eCard, Duck in Your Pants, one birthday person gets wild with a duck in their pants causing ruckus around town.We talked more about this off-beat eCard with our writer, Scott, who has written a good majority of the content on our site. This was actually his first eCard he ever wrote for us. Can you believe that?

Where did you come up with this idea of putting a duck in your pants?

I just wanted a random image that would be funny. Looking back on it, I can see how I got there. “Pants” is one of the funniest words in the language. A duck is an icon of comedy, from Daffy Duck to the Marx Brothers’ “Why a duck?” to the duck in the witch burning scene from “Monty Python and the Holy Grail.” Putting anything down your pants is comical, and a duck is extra silly. But I didn’t think it out that way at the time.

Do you write your own music? If yes, what instruments do you play?

I haven’t yet written any of my own music, but I hope to in the future. I was raised as a classical violinist and taught myself to play bluegrass. This year I took up the guitar as a way to learn about chord progressions and basic song structure. Before too long I hope to be doing both words and music.

Was this idea inspired by any real events?

Well, it starts from the reality that birthdays are supposed to be a time to do whatever you want. The rest is exaggeration. I’ve never actually put waterfowl down my pants or ended up in jail for partying too hard.

What is the craziest thing you’ve ever done on a birthday?

Skinny dipping in the Colorado foothills, which wouldn’t have been all that crazy except that my birthday’s in late October.

So if that special birthday someone is feeling quacky on their big day, send them Duck inYour Pants today!

Behind the Scenes, Inside JibJab, jibjab, New Content, Team JibJab

3 responses to “New eCard – Duck in Your Pants”