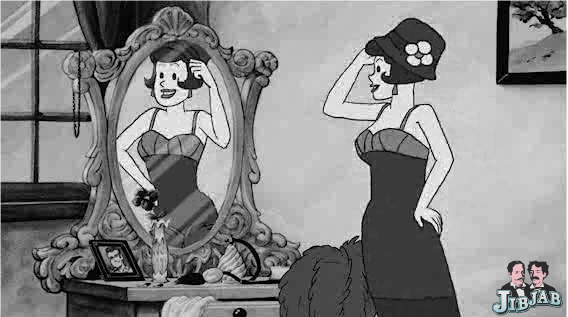 What is better than a present on your birthday? A compliment! In our newest eCard, Silent Star, you can let that special birthday lady know how cute they are. We got to talk with Colby Bluth about his process in making this eCard.

Have you seen any silent films? Do you have a favorite?

-I’ve mostly seen bits and pieces of silent films over the years on television. One of the few features I’ve seen in its entirety is Fritz Lang’s Metropolis, which is incredible. The ending to the Phantom of the Opera was spectacular as well. There is something special about those early silent films.

What tricks did you use to make the mirror reflection?

-No tricks really, but it was a lot of hard work. Everything was drawn the old fashioned way on paper, including her reflection in the mirror. First I animated the character in the foreground, then I had to match her movements in the mirror. This was the most difficult piece of animation I’ve ever attempted.

How long did this card take to animate?

– I think I worked on it for about a week and a half. I was also fortunate to work from my own animatic and select the audio track.

Did you watch anything to inspire this animation?

-Myself in the mirror channeling my inner flapper. Haha! I was also inspired by “The It Girl” Clara Bow and a little Louise Brooks maybe. I’m also a big fan of older cinema, so creating some traditional animation in black & white was a real pleasure.

Did you name the character?

Send this classy eCard to that special birthday lady today!