What would a JibJab Year in Review short be without an appearance from tabloid staples like Kimye and the Royals? Both couples introduced us to their progeny this year!

I really enjoyed having the opportunity to animate this scene for many reasons. There are just so many layers of satire going on at once. The setting mocks Kanye’s awkward and critically panned Bound 2 music video, baby North West is wearing his classic ‘hater shades’, and the motorcycle-to-cute-bicycle contrast between Kimye and the Royals plays to difference in pacing of the relationships between the couples.

Like most all of the scenes we inherit from the illustrators and designers here, the key components and anatomy are separated into different layers so they are ready for animation. Think of them as digital paper cutout puppets…

The first big step is to watch the animatic for the particular shot to figure out what the most important elements are and what the overall timing is. This helps the animator prioritize and know which actions or characters to focus on first and foremost.

In this case it was really important that I (the animator) get the timing and feel of the transition between the motorcycle and the bicycle to feel right. This means animating the background elements in such a way to fake the difference in speed while still making the camera move feel natural. Even more importantly, it’s important that the timing and animation of the motorcycle wheeling off camera feel powerful and fast too! 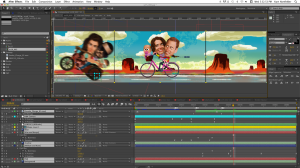 I’m really pleased with how this shot turned out. Even though it only lasts slightly more than two seconds on screen, I’m proud of the work and the little details I put into it.